Growing up an evangelical Christian makes having homosexual friends … difficult. Challenging. Eye opening. Values changing. All of those things. Of course I never would have known any of that if I hadn’t met Mike. Mike is one of my best friends. Not because we do everything together, but because we’ve been through a lot.… END_OF_DOCUMENT_TOKEN_TO_BE_REPLACED 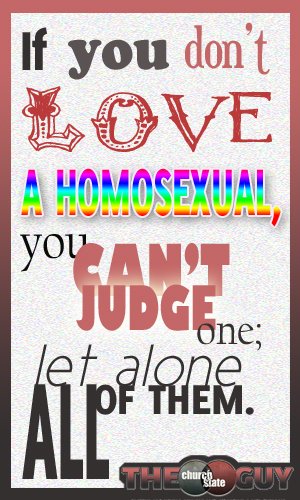 Growing up an evangelical Christian makes having homosexual friends … difficult.

All of those things.

Of course I never would have known any of that if I hadn’t met Mike. Mike is one of my best friends. Not because we do everything together, but because we’ve been through a lot. Mike was born and raised evangelical — like me. Went to an evangelical college — like me. Sought out Christian friendships there to “deepen our faith” — like me. Joined travelling singing/drama groups — like me. Was valedictorian of our graduating class — not like me, at all. And Mike is gay — not like me.

Mike struggled throughout all those fun puberty years, trying to deny his sexual leanings. Then he decided to pile on more guilt and suffering by going to a Christian college. But it wasn’t until we graduated that Mike slowly but consistently round up me and several other of his closest evangelical friends and confided in us. He told us how hard it has been his whole life, growing up in the Church, hearing all the things “we Christians” say about homosexuality and “the gays”, and knowing — with certainty — that he was gay. Me, being the poster-child evangelical, knew deep inside that I had contributed to that language, that vitriol, that suffering. I tried to quickly recall any time I had said something off-hand when Mike was around. What scared me most was that I couldn’t. I knew I had said stuff, but the meaning was so insignificant to me that I couldn’t remember one thing.

Mike didn’t confide in me because I was a Christian — he was a Christian! He confided in me and others because we were his friends. That moment of vulnerability most definitely changed Mike in serious ways. But I’m finally putting a brief sketch of this story into writing because it also changed me, forever.

I loved Mike like a friend, and when he came out, I realized I loved him more. I finally understood Mike, like it was the first time I had really met him. I saw his suffering and his dilemma. The last thing I was ever going to do ever again was to demean, demoralize, reject, scorn, or insult a gay person ever again simply because they are gay. It’s simply not an option for me anymore. Why? Because I love Mike, and Mike is gay, and that changes everything.

Shortly after Mike came out to me, I was invited at our church to offer the bread at communion. It was our tradition that for each person that took from the bread, the bread bearer should say “The body of Christ, broken for you.” I liked to add the persons name whenever I could. That Sunday, Mike came up to receive communion from me. I looked into his eyes and said those words: “The body of Christ, broken for you Mike.” I was a basket-case the rest of the whole service. How could I ever have thought the broken body of Christ was not also for Mike? How could I ever have believed that the blood was shed for me, but wasted on him? Something about the uninformed religious dogma had separated me from him. But that Sunday, the broken bread and poured out wine reminded me forever that he is my brother, and I love him.

The public Church is at war with secular society over the issue of gay marriage because of ignorance, not theology, or doctrine, or secularism. Yes there is plenty of biblical theology to believe that marriage is between a man and a woman, and yes the Church has every right to only marry men and women with their clergy, within their churches. But does the church have a right to oppress and condemn a people group, ever? No. Are there plenty of creative and relatively easy solutions to the “gay marriage” question? Absolutely. (here’s three, pick one: the “two people” solution, the “end marriage” solution, the “marriage is for the church” solution).

Let me say it again: If you are a person of faith and do not yet LOVE a homosexual, try — it’s not difficult.

2 thoughts on “My Story Because of Mike”