Much is being said in the media about the so-called “War on Christmas”. Many conservatives believe that “traditional Christmas” is being stripped from our society. I think they are right, but for the wrong reasons. Christmas was stripped from society the minute businesses saw it as an opportunity and decided to leverage the hell out… END_OF_DOCUMENT_TOKEN_TO_BE_REPLACED

Much is being said in the media about the so-called “War on Christmas”. Many conservatives believe that “traditional Christmas” is being stripped from our society. I think they are right, but for the wrong reasons. Christmas was stripped from society the minute businesses saw it as an opportunity and decided to leverage the hell out of it for their own profit margins. Afterall, their is only a “Black Friday” because of Christmas.

On a personal note, we have a multi-cultural family. My wife is from Germany. We speak German with our kids, and our oldest goes to a German/English kindergarten here in San Diego (who knew there was such a place!). Honestly, culturally, Germans and Americans share a lot of cultural icons. My wife and I relate on a lot of levels. But one thing that always stands out is how to celebrate Christmas. Germany is rapidly becoming more and more commercial in their Christmas celebrations, but they still have a strong sense of tradition and — in Germany at least — tradition is centered around the Christian calendar because of their Catholic and Lutheran heritage. Today is a great example of one of those differences. Today is “Nikolaus Tag”, or Saint Nicolaus Day. Catholic’s traditionally celebrate the day a saint of the Church died or was martyred. December 6 is the day Saint Nikolaus (did you know he’s the patron saint of “Pawnbrokers and Bakers”? Me neither! This is a very informative article all about him).

In Germany, they celebrate Nikolaus Tag, by putting shoes or socks at the foot of the children’s bed. The parents fill them with treats and goodies in the middle of the night. It’s fun, and cute and succinctly collects all our consumerist tendencies neatly into little booties — where they belong! Far away from the celebration of Christ’s birth.

I don’t understand how anyone can think we are celebrating the birth of Christ by giving gifts to our closest friends and family out of our abundance. I really struggle with the idea that I need to save money for Christmas so that I can buy my wife and kids more stuff, or my sister and brother-in-law more things they didn’t really ask for or need. 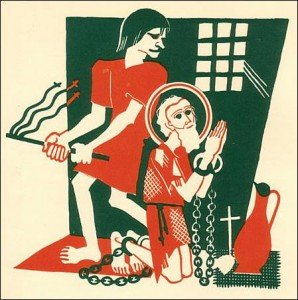 Instead, when I think of the wise men giving to Jesus and his family, I realize that these men traveled long and hard to give. They gave gifts with a purpose. Gold to pay for the family’s return journey, frankincense and myrrh for both Hebrew religious ceremonies and as a fragrance used during burial. These gifts enabled this poor family to provide for Jesus in ways that they would not have been able to without them. They were gifts for the present, near future, and even to Jesus’ death. they were gifts that enabled, not mere trinkets or widgets.

My war on Christmas will take some time, but the gist of it is that I want to slowly, as my children get older, move the whole gift-giving thing to Nikolaus Tag, ardently celebrate Advent, and spend Christmas Eve and Day giving to people like Mary, Joseph, and the infant Jesus. Giving gifts that enable.

Other posts and thoughts on this Season:

An Advent Reflection in Light of “Black Friday”

Jon Stewart’s Take on the “War on Christmas” where he says “Christmas is so big now it’s EATING other holidays! Watch out Halloween, you’re next!”