I have way too many things to fit inside of this little post, so here’s a quick summary of what I want to say: I “adopted” some plugins from the WordPress Repo One is called ImageLens and I really like the approach I took with it But in researching tools for it, I came across… END_OF_DOCUMENT_TOKEN_TO_BE_REPLACED

I have way too many things to fit inside of this little post, so here’s a quick summary of what I want to say:

I’ve been looking for ways to push my knowledge of WordPress and general PHP and Javascript coding further, so I thought that I would reach out to fellow developers and see if they don’t want to support their plugins anymore, then I could take it over for them. Little did I know there’s a little trend that WPTavern has been advocating called plugin “adoption.”

Basically, developers who can’t support their plugins on the Repo anymore can add the “adopt-me” tag to their plugin so people like me can browse for plugins that want to be adopted like this: https://wordpress.org/plugins/tags/adopt-me

One really fun part of this story is that the kind folks at WPTavern got wind of my adoption adventures and decided to do a little write-up on it. Yeah! So for the full story, check out their article here: http://wptavern.com/a-successful-wordpress-plugin-adoption-story

I adopted ImageLens because it used a similar javascript to what I used for the ZOOM! FooGallery Template. The way it’s implemented for ZOOM is very different than if you wanted to activate this Magnify-glass effect for an individual image, or for all the images on the page. So I thought it would be really interesting to work with the same script (basically) but with a whole new approach.

I’ll Get a Little Technical Now

Some of the challenges for me were that I wanted to add custom Meta Boxes to all pages and posts, and to enqueue the script in different ways depending on the settings in that metabox.

This lead me to try out a Custom Metabox class called “My Meta Box” by Ohad Raz. It’s a really slim and easy class for metaboxes. I typically use Humanmade’s or WebDevStudios Custom Meta Boxes, but I was attracted to Raz’ because it’s super slim.

The next challenge was I wanted users to be able to select “Activate on all image on this page/post”. What that requires is filtering the content loop. I searched all over for a simple way to just add a class name to the div surrounding the content loop, but it simply doesn’t exist. So, for now — only for this option — I added an extra div around the content loop in order to add that class so I can target ALL images within the loop. Not ideal, but it works. (Open to suggestions).

But for the “Active per image”, I needed to add a custom Image field and then enqueue the script different if an image has that field selected. This was a new combination of things I had never considered before. Basically, I let the metabox select field dictate how the javascript was enqueued, then I use the custom attachment field to add an extra class name to the image which is targeted by the javascript. Worked out pretty well.

So while I was developing ImageLens, I researched different ways that people implement this magnifying glass look. One of the first scripts I came across is called “Snipe”. Obviously, this author imagined the effect looking more like the scope on a sniper rifle. Ok, that’s fine. But then his choice of featured image is a woman in bikini on the couch. Really!? Because sex and violence sells right!? Ug! Putting a scantily clad woman directly “in the line of sight” overtly suggests an ugly combination of sex and violence… for code. Really, really, really dumb.

I fully understand that there are statistics that show that both women and men respond more positively when seeing women in an ad. I fully understand that women are beautiful and there’s no shame in bikinis or burkas. But this is for a piece of code! It has NOTHING to do with bikinis or burkas. It has everything to do with DOES IT WORK!? And, by the way, Snipe doesn’t work as far as I can figure.

You might have noticed I didn’t link to this example. I don’t even want to give it that attention.

Brad Griffin pointed out to me that sometimes it even seems that Women like ads with women “assets” in them as well. This is a really detailed overview of a company trying out different women’s ads with and without the women’s chest showing. It shows clearly that the ad with chest showing got more click-throughs. But it further shows that it was women clicking through much more than men when the chest was shown.

Does that mean that women are objectifying women too? I kinda doubt it. Personally, whether women click ads of women more than men do or not does not change the nature of the conversation. Those who use others’ bodies (not persons, but bodies) to sell unrelated products are contributing to domestic violence, date rape, lower wages of women and more.

I don’t want to go into all the reasons why objectification is real, and bad, and pervasive. I’d really encourage you instead as a self-reliant and informed person to read a bit yourself. But here’s a quick head start:

But since I’m writing with web developers in mind, let me make a quick analogy:

“Are you left handed?” — Uh, no. I use both my hands while coding though!

“Are you from Philadelphia?” — Hmmm… no, but I’m sure my internet connection and computer are just as strong here as there.

But there’s another part of the story. There are really talented and skilled left handed web developers in Philadelphia. They work hard and produce excellent websites with clean and responsive code. Yet when they turn in their work, the client asks:

“Did you use your left hand for this whole project?” — Of course, I need both hands and I am left-handed afterall.

“That’s amazing, maybe we can skype sometime and you can show me how you do that.” — {Awkward silence…}

“And were you in Philadelphia during the whole project too?” — Um… I think so. I visited my Uncle in New Hampshire for a long weekend.

“Oh good. This is perfect.”

This seems like an utterly ridiculous analogy. But that is in essence what sexual objectification does. It values a certain kind of person for traits that they really don’t have a lot of control over and heightens their influence and importance over others without those traits. It values the traits, not the person. It makes left-handed-ness a commodity and values it over coding skills, intelligence, customer service, professionalism.

Also keep in mind, of course men can be objectified as well. Or people can be objectified for things beside sexuality. But why is this such an important topic? Because the objectification of women’s sexuality leads to all kinds of horrible consequences that are reflected badly in virtually every country in the world. It’s real, it’s pernicious, and it’s got to stop.

This Isn’t New, But It’s Got to Stop

I’ve seen tasteless displays of scantily clad women in plenty of scripts, plugins, themes, etc. I’m not alone either. Over a year ago, Rebeccas Markowitz bemoaned the use of of what she called “scandalous images” throughout theme shops.

I reached out to friends on Facebook for their input on this. In terms of objectification in the worst way, these are my “favorites”:

Sure, you need a flyer for your Club, or your neon lit barber shop. So you go to Graphic River and YES! Sexy women in strange Jetson-esque outfits highlighting their crotch area. That will get people looking at this flyer! It sure will, and no one will ever remember what the flyer was about. Good for you.

Bonus! Get all the authors sexy, objectified women posters in one bundle.

#2 Terrible Example: Zoom In and Out Slider

You need a slider for your website. Doesn’t everyone!? (No, actually no one does). But how do you tell which one is REALLY great!? I mean there’s sooooo many. I know! The one with all the bikini models on it! That will get people to buy this piece of code. Really…. Really!?

But the WORST example definitely goes to the FullScreen Backgrounds WordPress plugin on CodeCanyon. For LOTS of reasons. I mean, besides the fact that it is a horrible use of video autoplay, it’s a women’s underwear commercial! For a piece of code! The music, the women, it’s all about objectification to sell a piece of code. Ugly, ugly and needs to stop.

If you’re thinking right now that these pieces of code are pitching themselves to all the desperate boys doing the coding, then you’ve missed the boat on women in tech. Even within the comic book world, a world notoriously stereotyped as “just for guys” is getting wise. The Hawkeye Initiative is a hilarious site that highlights what male super heros would look like if they were drawn the way women super heros are drawn. Even one of my favorite online comic artists “The Oatmeal” took a swipe at the horrendous first edition cover of Spider Woman.

If comic book fans can speak out against the ridiculous standards in comic books, then I think plugin authors and theme developers can take the high road as well.

Make the “No Women Objectified” Pledge

So here’s my encouragement to all WordPress Repo plugin Authors.

I reached out to the WordPress Repo Plugin Team for their take on using images in the screenshot area, and this was their response:

Generally speaking, we’d prefer screenshots to be actual screenshots of the plugin and useful to the user. The plugin directory is not really an appropriate place to make a statement.

I have nothing but respect for the Plugin team, so I complied, removed the image and added a link for more information into the description of the plugin instead. I think if you link people back to your site explaining how you made the plugin and how “No Women Were Objectified” (and maybe even use this image), then that would still be an excellent statement. 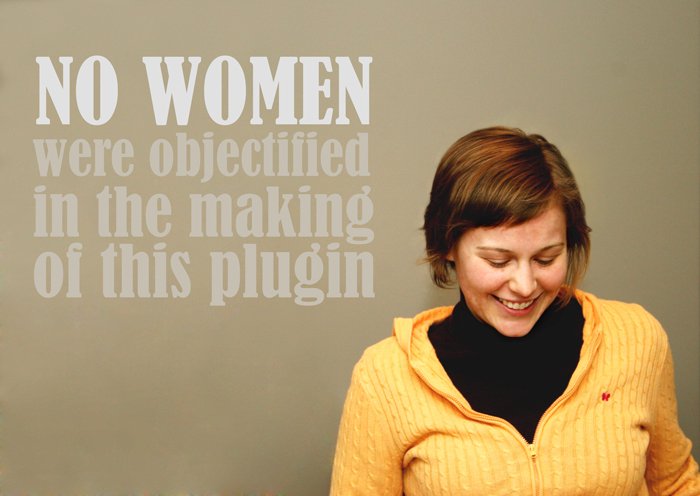 Here’s cover images and profile images for Facebook and Twitter if you want to show solidarity on social media. Then at the bottom, there’s the whole social media pack with PSD’s if you really want to get creative on your own.

The image of the woman smiling I felt was really just perfect for this. Thanks to sxc.hu (now called freeimages.com) for having great and free images like this.

Special thanks to Jami Mays for reviewing this post all along the way to make sure I wasn’t being an idiot. Jami is a talented front-end developer and kind-hearted soul (most of the time 😉 ). If you are looking for someone you will certainly ENJOY working with, contact Jami at Imajworks.com.

12 thoughts on “No Women Were Objectified While Making this Plugin”