So you just built yourself a great little website and you want to attract some needed attention to it. Like most developers of all things “web”, I advise my clients to get active on Social Media. Start posting things related to their “product”, or their demographic. I’ve even told them that they should just post… END_OF_DOCUMENT_TOKEN_TO_BE_REPLACED

So you just built yourself a great little website and you want to attract some needed attention to it. Like most developers of all things “web”, I advise my clients to get active on Social Media. Start posting things related to their “product”, or their demographic. I’ve even told them that they should just post funny quips about their day to day business just to keep their Facebook pages active and get their brand out there more.

Well, some folks are not happy just posting stuff about their product. They think they’ll get A LOT more likes and shares if they share other peoples stuff on their Facebook pages. But there’s a trick to sharing others people’s stuff and YOU getting the likes and shares for it. Here’s the process right here: 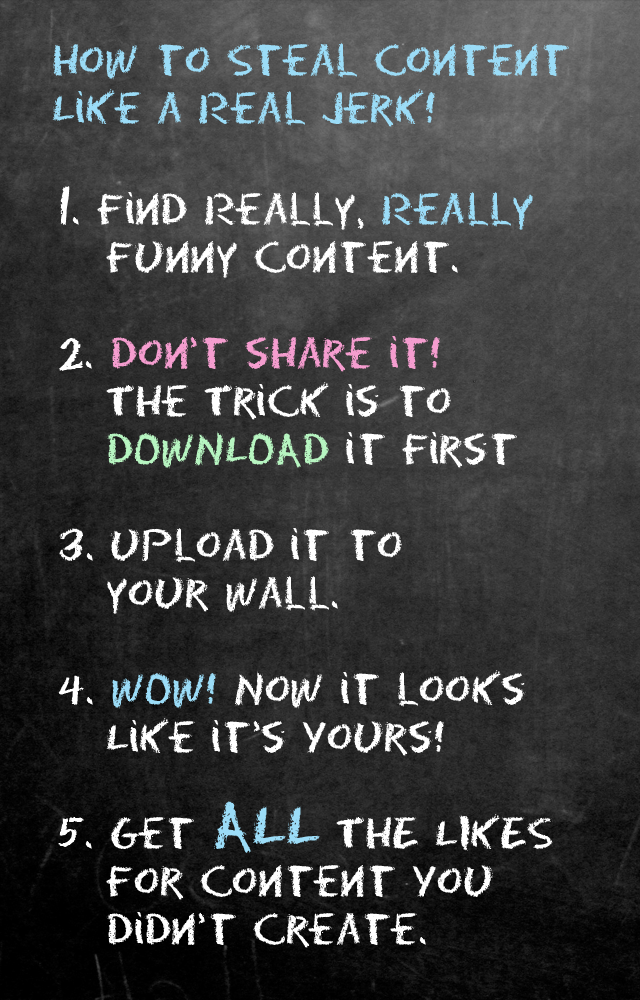 What are you Actually Talking About?

If you’re on Facebook for any amount of time and have “liked” something, then you probably already know what I’m talking about. A friend of yours shared a funny cat video, or some hilarious ice bucket challenge fail. You “liked” it, then you got something like THIS: 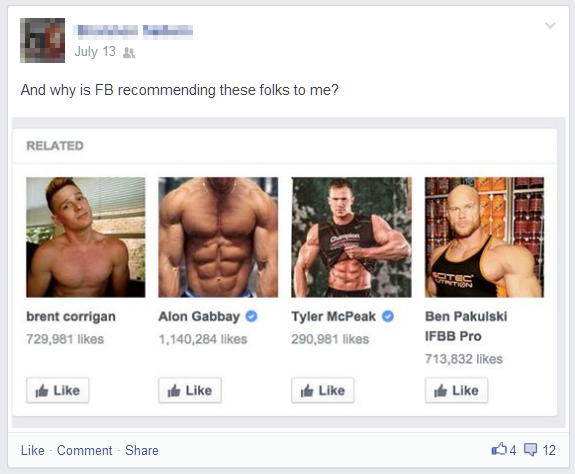 Well, you just got “Ellis Rolled“. You THINK you’re liking cats, but because Ellis is a professional content stealer, you’re going to have muscle men chasing you around Facebook for the next week or so.

Blame it on James Ellis

James Ellis is a “Christian body builder” (and NO! I won’t link to his profile). James Ellis want you to like his Facebook page, that much is clear. So he went about posting a bunch of really funny (mostly) video clips on his site. Everyone likes funny videos right? But they’re all probably related to body-building or exercise or something like that right? Nope. Crazy lip synching folks, guys doing superman out their car window, dogs, cats, weird things happening at political rallies. You name it.

But here’s the problem. All of these videos have been downloaded from YouTube or some other source. He’s not sharing the link to the YouTube video. Why not? Well, it doesn’t get HIM more likes on his business page when he shares other people’s content. But you see, that’s the point. He’s basically taking the attention away from the content creator and putting on himself. “Look what I shared! Like me for it! Follow me for it!”

Blame it on George Takei

In retrospect, the most obvious and famous example of this is actually George Takei. We all knew he was that guy from Star Trek, but nobody really cared (I just insulted millions of trekkies… oops!). That is, until he started posting the funniest crap on his Facebook wall. Then everyone was like “Man, that George Takei is hilarious!” Actually, he is, but his wall was really just a bunch of funny images taken from all over the web with his much less funny comments at the top.

He still posts really funny images at the top, and sometimes he does a “faux-attribution” technique and says “from a fan”. Where did that “fan” get it? Did they create it? And wouldn’t that fan like a mention? No, they are far too insignificant for an actual mention on Takei’s wall of amazingness.

Takei looks at Ellis’ stuff and he’s like: “I was sharing other people’s crap on my wall waaay before it was cool!” Total content stealing hipster, that Takei.

But here’s the kicker. Why are these folks doing this? I’ve even seen non-profit business pages doing this. Well, not everyone looking to generate leads for mortgages on a social media website like Linkedin does this, but there are some businesses that have got into that habit.

Basically, they are turning the concept of “virality” on its head. Typically, when a video goes “viral”, it’s because the original gets liked and shared a ton of times. Facebook can track the analytics from the original upload to the upteenth share through millions of viewers. But see, once someone like Ellis downloads the video instead, and uploads it to their wall, the virality is stolen. Facebook now considers that video a totally different video and the “owner” to be Ellis, not the original content creator.

Ellis doesn’t want that video to get likes, he wants his site get likes. So when he uploads the video to his wall himself, then you “like” it, Facebook thinks it’s related to body building, not cats. That’s why, even though you “liked” a post about cats, Facebook then immediately recommends body building crap to you. It’s like title baiting, but worse because you genuinely LIKE the content, but you don’t like the consequences of “liking” it.

(I might have set a record for the number of times “like” is used in one article combined with it’s various meanings and usages. Yeah me!)

In the realm of copyright or creative license, this is actually called stealing. You are taking credit and receiving a benefit off of work you didn’t create. But Ellis caught on to the fact that this isn’t the most ethical practice. So occasionally he will put some faux-attribution of the video into the post content. He would say “From YouTube user chino21867”. But notice: He doesn’t link to that YouTube users account, he doesn’t link to the actual YouTube video. He still downloads the YouTube video, uploads it to Facebook, puts HIS website on it and gets all the likes and shares from it.

This is a really harmful practice for 3 main reasons, paired with real alternatives:

I just want to help. Please, listen to your fellow fitness pro Susan Powter and STOP THE INSANITY!!